About the Yoik and language and the loss.

Yoik is the native Sámi musical expression which is reminiscent of singing. It has layers of meaning as it holds identity markers and was traditionally very significant in how social interaction took place within Sámi communities (and still is to a certain extent). It also had more practical purposes, such as  Yoik is closely tied to Sámi culture past and present, nomadic reindeer hunting and herding in the arctic environment. Johan Turi wrote: “The yoik is not just music. [Its] functions are much broader than that. They are routes to social contact.”

The Norwegian government and the church (also in Sweden) forbade the Yoik and Sámi languages in public from 1880 to  1970. We call it the Norwegianizing period. The platform for this was the Darwinist ideology that the Sámi people were of an inferior race and culture and could only survive by becoming ‘Norwegians’ Before that, the church missionaries from early 1700 had worked intensively to demonize Sámi religion and religious practice, which also included the drum and Yoik. All 9 Sámi languages in Sápmi  (The north of Norway, Finland, Sweden, and Russia) are through this on the UNESCO red list of endangered languages.

“Building on the lessons learnt during the International Year of Indigenous Languages (2019), the Declaration recognizes the importance of indigenous languages to social cohesion and inclusion, cultural rights, health and justice and highlights their relevance to sustainable development and the preservation of biodiversity as they maintain ancient and traditional knowledge that binds humanity with nature. (UNESCOs The international decade of indigenous languages 2022-2032)

After lots of research and interviews an electroacoustic, low-key sound spiral was composed. We used a collection of original Sámi names for places in the area (which have been colonially replaced with Norwegian names), wax roll recordings of Sámi joik and speech from 1913–1915, and today’s Sámi speech from the aera. The eternal sounds and pulses from local nature, glacier, rocks falling, wind, and rain was recorded on site and mixed in as a part of the composition. We then had a site specific composition talking through the ages in a spiraling

loop.   All this is in line with the Sami mindset and perspective. For the impression of nature, objects and time talking to us, we had traditional Sami craftsmen making miniatures of traditional tents, fireplaces, and other utility items, in which we hid the speakers. These were then spread in a vast aera were hikers wander, from woodland to mountaintops. Aeras were also the traditional nomadic reindeer herding has been, and partly still exsist.

Some background material in English

“The nomad has a territory;  he follows customary paths; he goes from one point  to another; he is not ignorant of points (water points, dwelling points, etc.). But the question is what in nomad life is a principle and what is only a consequence. (…) The water point is reached only in order to be left behind; every point is a relay and exists only as a relay. A path is always between two points, but the in-between has taken on all the consistency, both an autonomy and a direction of its own. The life of the nomad is the intermezzo”

(…) In many Aboriginal (Indigenous) languages, you create meaning through complex, poetic metaphor Those metaphors are connected to the environment. The more understanding you have of the environment and place you come from, the more vocabulary you have. The inverse is also possible. Destroying the landscape, or removing particular animals or plants, removes language. And if you remove language, you’re also removing knowledge of landscape knowledge that binds humanity with nature (…)

(…) Listening to the unsaid can be a good input to reading sources as well as a situation. It nevertheless presupposes that the unsaid and the said are seen in relation(…) – Storli 1992

(…) “Past, present, future and landscape, time and space are undifferentiated dimensions in many traditional societies. The events can therefore not be detached from the places where they take place(…) – “Stalloboplasser” Inger Storli 1992 p.122

(…) Biologists estimate annual loss of species at 1,000 times or more greater than historic rates, and linguists predict that 50-90% of the world’s languages will disappear by the end of the century,” the researchers wrote. (…) An epidemic is killing indigenous languages.(unesco)

Our claim is then that 50-90% of the world’s different mindsets and platforms for mindsets disappear with the disappearing languages.

For more and videos: https://www.facebook.com/vuemien.voices   (partly in Norwegian) 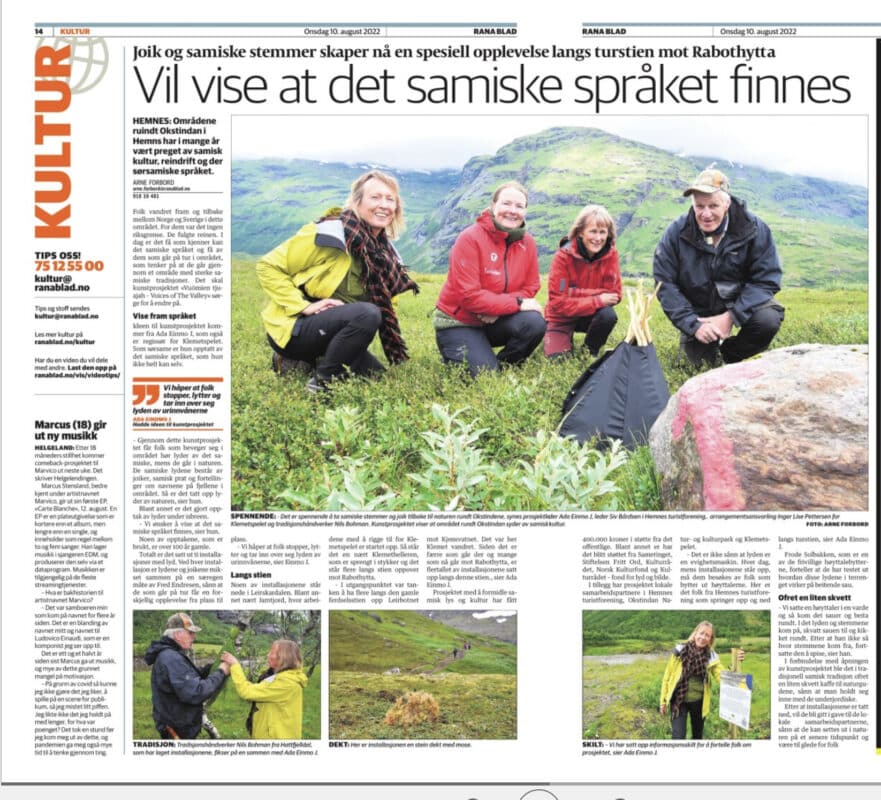